Last week I enjoyed some extended winter by cycling in the winter cycling capital of the world, Oulu in Finland. I was invited to give a talk at the ITS-Oulu conference and decided to stay a bit longer to get acquainted to the city. My good friend Pekka Tahkola was for two days my guide in the city. He is not only an excellent guide for the city and big engine behind the MTB-cycling tours in national park Syöte, but he also has a great interest in mapping cycling related information. A good reason to share with you the current online sources for open cycling data in The Netherlands.

The search for more and better data for cycling policies got a boast with the development of the super cycle routes. Traditionally cycling infrastructure was build to make streets safer for everyone, but the claim that cycling is also good for ease traffic congestion had to be funded by better data. A variety of programs has led to more insights in travel behavior of people. The most developed program was running in the province of North-Brabant in the period 2013-2018. With the B-riders app around 10.000 people tracked their trip to prove to their employer they cycled to work and received rewards. The data was anonymously processed to valuable information about origin-destinations, route choice and delays at junctions. With some processing it also gives insight at train stations in the direction travellers are coming from and the time bicycles are parked at the station. Combined with traditional counting, both permanently and incidental this gives a lot of information about cycling. As frontrunners the Breda University of Applied Science build a nice dashboard to give insight in different data sources. Unfortunately the B-riders project lost funding and users had to move to other apps like Ring-Ring to keep their rewards. The lack of feedback and continuity also was a problem for the Fietstelweek, running for three years in September 2015, 2016 and 2017. The resulting decline in volunteers made the province of Utrecht start a new project. To give users more interest in sharing their data a feature was added by measuring the air quality every 10 seconds and plotting it almost real time at a public site (click “Ga verder naar het dashboard”). Currently the real time tracking is disabled, but in a few months time it is estimated there will be 500 people cycling and gather data every day. 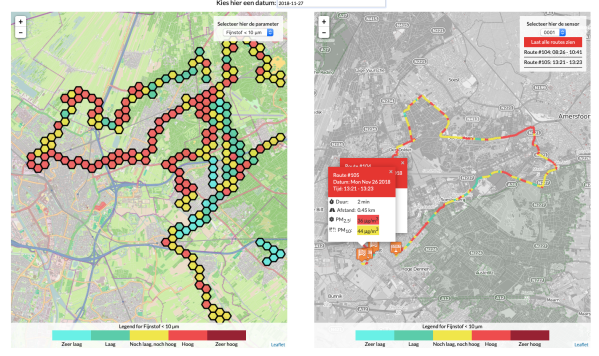 Apart from riding bicycles there is demand to have more insight in parking of bicycles, especially at train stations. People want to know where is empty space to park their bike without wandering around for a free spot, and the guarding staff wants to know how long bicycles are parked in the garages. Most garages have time limitations to park your bike, usually 14 or 28 days. In the last ten years several systems have been developed to detect bicycles at the garages

The Dutch bike share system OV-fiets is open for everyone with a Dutch bank account and can be used in combination with a Dutch public transport card. Very easy for us Dutch, but a pain in the ass for foreigners. Luckily we can now rent two bikes on one card, so when you visit Utrecht, I can rent you a bike. Most problematic is the availability of bikes at stations. As the rental period is 24 hours, circulation of the bikes is relatively low and a lot of bikes are needed to keep the system running. To give people insight in the chance to grab a bike at the stations the operator, NS (Dutch Railways) opened the system to show availability. University of Groningen made a nice visualization. Dutch readers can read more here about the technique used, other geeks read the source code on Github.

By this information I was able to find the use of the OV-fiets box in front of the office of the province. This box was installed 5 years ago, but was not very popular for the target group in mind. Most surrounding offices have a private fleet of shared bicycles, so there was little demand to use these bicycles. Only Thursday afternoon some bicycles were rented to return the next morning, probably employees going for a drink in the city.

Recently the number of bicycles in the box went up and also the number of hired bicycles rose. Data indicates the bicycles are used by an unexpected target group: students leaving at night to go to the city or their friends and no public transport available. I recently asked a person stepping out of the box, and he confirmed to be a student, happy to use the OV-fiets, as his bike was broken. 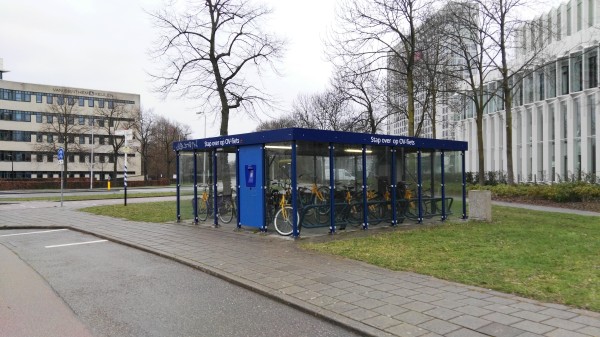 The OV-fiets box in front of the office of the province, installed in 2013. Since half a year students use these bikes to travel to the city.

The evening ballet of cyclists at Berekuil in Utrecht.
We have a wet and grey winter in the Netherlands. I hope there will be some snow, but for now the forecasts are only more rain.
Tried to catch sunrise in a #selfie, but instead catched some geese. Anyway, happy blue Monday. ☺ . . . #cycle #bike #fiets #fahrrad #bici #sunriseoftheday #sunrise #cyclelife #bluemonday #bunnik #outside #outsideisfree
Finally on the road bike again. . . #bike #cycle #fiets #cyclelife #bikewanderer #outdoors #outsideisfree #utrechtseheuvelrug #Heuvelrug #amerongen
Great place to watch cyclists an drink beer. Have a nice weekend!
Time for beer and pizza and film! #mannenavond
Different view on Utrecht, no bicycle in sight.
Getting ready for the Winter Cycling Congress in Joensuu, Finland. Bought goggles to be prepared for fresh snow. 😊❄