At the end of the meteorological summer, @bijnanooit closed his 10 year practical research into getting wet during his cycling commute. He started his project based upon the idea that facts must convince people and recording his experiences Would help them to get tot he idea it almost never rains. Through media coverage during short wet periods, he gradually understood his message would have little impact on changing habits in commuter traffic. He is preaching to the choir, people who have been cycling see their confirmation by his data, while the non-cyclists mainly pay attention to @bijnanooit when it rains. Nevertheless, I welcome his efforts over the years and hope his website will remain available for future use. Many small stories like his can contribute to the big story about cycling as an happy and effective means of transport. 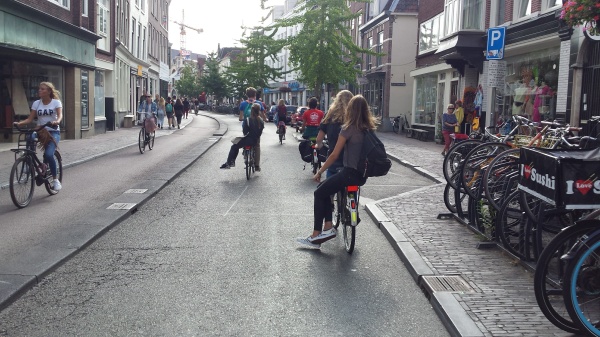 On the ongoing road of feel-good stories about cycling, Chris and Melissa Bruntlett added their stone by presenting their latest book “Building the Cycling City: The Dutch Blueprint for Urban Vitality” about the transformation of Dutch cities. For the description of the transformation of Utrecht they had the privilege to interview alderman Lot van Hooijdonk. The book makes good use of the friendly competition between the Netherlands and Denmark. As we all know Copenhagen has more bicycles than cars, but the Netherlands as a whole has more bicycles than inhabitants and in more than 200 cities bicycles outnumber cars.

In new book, @modacitylife throw down a gauntlet:#Holland, not #Denmark, is world’s great cycling nation.
Only country where bikes (22.5M) beat out people (18.5M).
35,000 km of separated infrastructure.
Bikes outnumber cars in #Copenhagen —but same is true in 202 Dutch cities. pic.twitter.com/5WQvxoRSvb

I once fueled this friendly competition by competing with the city of Copenhagen by presenting our biggest bike failures in 2013 (See for more text the chapter in the conference magazine).

The competition is entering a new level as my boss has allowed me to have a work exchange for six weeks with the Copenhagen Region. For this exchange I will study how decision-making in the Copenhagen region works around cycling infrastructure. The 23 municipalities cooperate on a voluntary basis and receive a subsidy for their bicycle projects directly from the state. Does this lead to a different involvement in cycling than in the Netherlands? I am also going to teach them the intricacies of Dutch bicycle traffic, such as the way in which we handle bicycle parking at train stations in the Netherlands. I will also show them how the provincial bicycle traffic model works, which I developed together with Mobycon and Strafica on the basis of census data and data from the Dutch Cyclists’ Union. I will happily insert in the daily flow of cyclists through the inner city of Copenhagen. I am curious about the actual differences in cycling culture, which you only get to know during a longer stay.

The evening ballet of cyclists at Berekuil in Utrecht.
We have a wet and grey winter in the Netherlands. I hope there will be some snow, but for now the forecasts are only more rain.
Tried to catch sunrise in a #selfie, but instead catched some geese. Anyway, happy blue Monday. ☺ . . . #cycle #bike #fiets #fahrrad #bici #sunriseoftheday #sunrise #cyclelife #bluemonday #bunnik #outside #outsideisfree
Finally on the road bike again. . . #bike #cycle #fiets #cyclelife #bikewanderer #outdoors #outsideisfree #utrechtseheuvelrug #Heuvelrug #amerongen
Great place to watch cyclists an drink beer. Have a nice weekend!
Time for beer and pizza and film! #mannenavond
Different view on Utrecht, no bicycle in sight.
Getting ready for the Winter Cycling Congress in Joensuu, Finland. Bought goggles to be prepared for fresh snow. 😊❄