As most people, we celebrated Christmas having a good family dinner. Of course this required a travel, we did by train and bike. And we were lucky! Between my city of birth, Eindhoven, and the place I was raised, Valkenswaard, a new cycle highway was opened the 4th of December. A cycle route that caused a lot debate, but by making the political decision dependent of the realization of a new highway for cars, it was finally realized.

The cycle highway was projected on the abandoned railway line leading from Eindhoven to Valkenswaard. The original railway opened in 1866 as part of the line from Eindhoven to the Belgian town Hasselt and was important for transporting coal. The line was also open for passenger transport, but closed for this purpose in October 1939. Competition of busses became too strong. After the second world war some special trains for employees to the Philips factories carried people from Valkenswaard to Eindhoven until 1951. Freight trains remained on the tracks until 1962. As a result of the railway improvements in Eindhoven and the building of flyovers, the line was closed and got a detour via Geldrop. Some rumors say an other reason was the Mayor of the town Waalre, in between Eindhoven and Valkenswaard. He was living near the rail tracks and awakened by the running cargo trains. Anyway, the tracks were removed in 1962 and the section between the build up areas of Eindhoven and Valkenswaard remained clear until 2015.

The old railway line remained visible in the woods.

In 1946 plans were made already to close the railway, as it didn’t fit any more in the cityscape of Eindhoven. Later on, a motorway to Valkenswaard was planned, to accommodate the expected growth of car traffic from Valkenswaard. Due to funding problems, local protests and on-going negotiations between the national road department, the province Noord-Brabant and the municipalities of Eindhoven, Waalre and Valkenswaard, until now the new link between Eindhoven and the Belgian border has not been build. In the 1990s a cycleway was proposed on the 4.85 kilometers of the old railway. Also this initiative could meet a lot of skepticism about the effectiveness and protests of local nature groups. In 2010 the planned route became part of the national initiative for cycle highways. In 2012 both cases of the cycle highway and the car highway were joined by a political agreement of all parties in the project “Grenscorridor N69”. As the website states: “The province of Noord-Brabant had a special perspective for the new road construction of N69. Between A67 and the Belgian border we seek to build a new road combined with big investments in nature, agriculture, landscapes, water and recreation. And local measures has to be taken as well. In this way we can better use the existing capacity of the main road network and better control traffic flows. People can get to their destination as quickly as possible.” 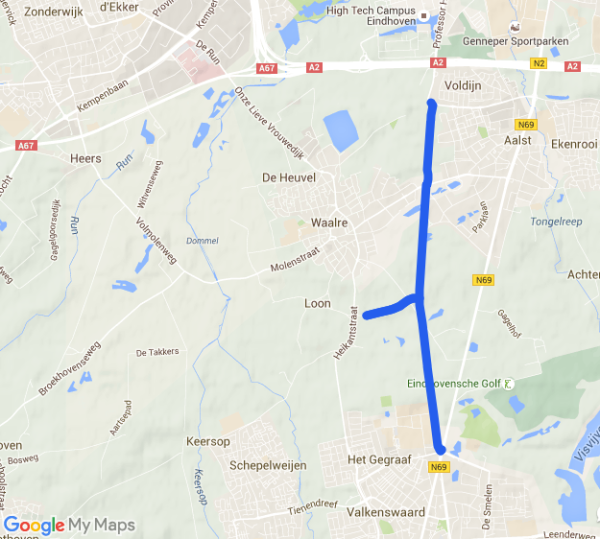 Making the cycle highway part of the integral approach for the region was the solution to realize the route. To minimize the ecological impact some measures were taken. The route is illuminated during rush hours only, in the period between 20:00 h and 6:30 h it will be completely dark. Amphibians have a safe crossing, two small tunnels were made combined with ridges along the path to guide them to the tunnels. The route not only connects Eindhoven to Waalre and Valkenswaard, there is also a new branch in the direction of Dommelen. In combination with rural roads it is now much more pleasant to cycle to Eindhoven.

On our way to my parents for Christmas dinner, we took OV-fiets at the railway station of Eindhoven and explored the excellent route. Although compared to other railroad cycle routes this route is not very long, it is a great addition for the region. Finally it is possible to cycle without the noise of car traffic and disruption caused by traffic lights from Valkenswaard to Eindhoven! Back in my days I always had to cycle along the national highway, or other local roads. I will share some tasty stories about that during the Winter Cycling Congres 2016!

When I explored the route it was open for less than a month and the official opening will take place in April, but all kind of people already make use of this route by themselves. Have a look on your own how this new route looks like. 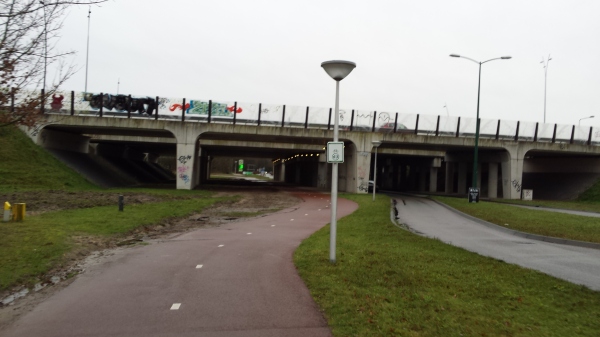 Crossing of Highway A2/A67 at the border of Eindhoven 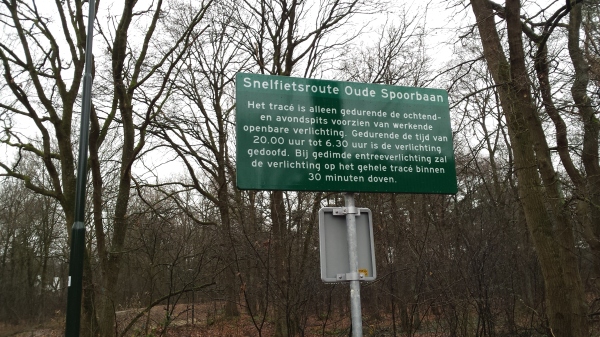 Sign informing the lighting switches off between 20.00h and 6.30h

Entrance of the cycle highway

It used to be a railway 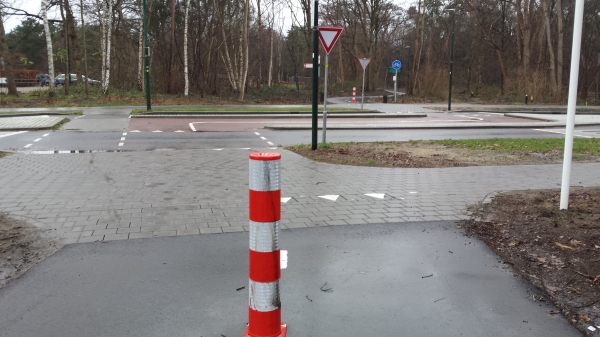 Even on this highway cyclists have to give way, at the only crossing with cars.

Very clear view on the Kon. Julianalaan in Waalre 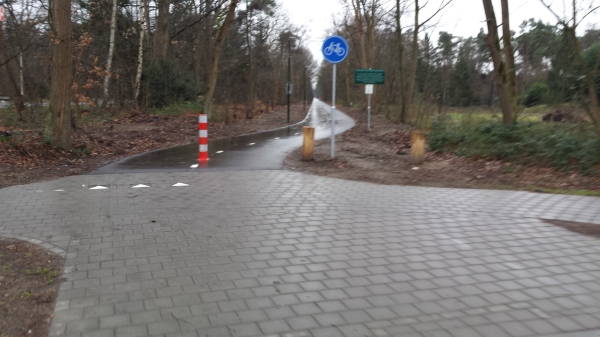 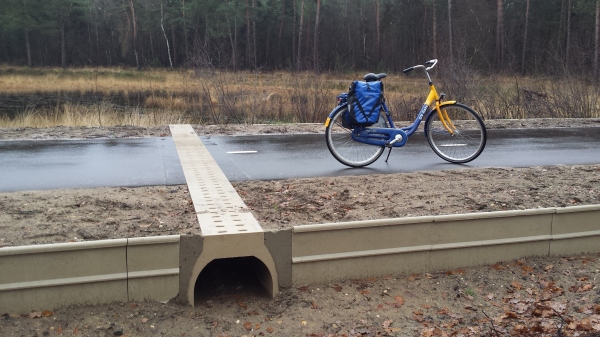 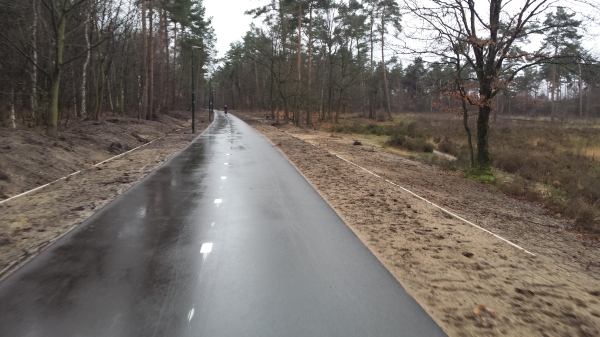 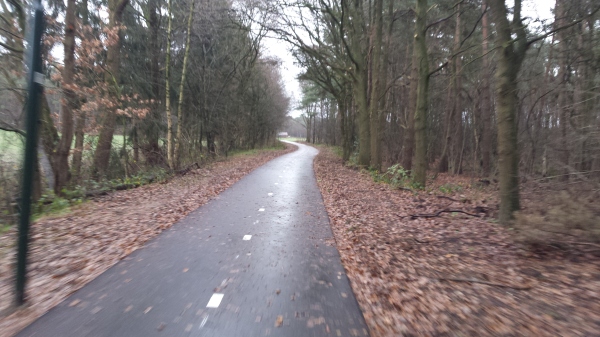 Junction in the woods, weird to see signs

Reference to the old railway line 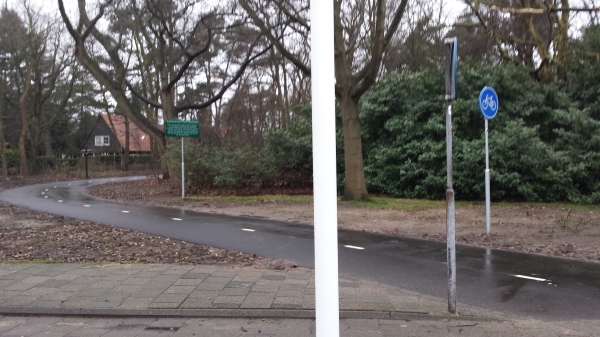 The other end of the route in Valkenswaard

2 thoughts on “Exploring the Cycle Highway of Eindhoven”

Enjoyed autumn with a recumbent ride.
Happy to see the oliebollen kiosk at Neude.
My friend David from Madrid hit the Dutch news by importing abandoned Dutch bicycles in Spain. Well done!
Added Germany to my list of visited countries of this year. Lots of rail infrastructure today, but also street plays in Arnhem!
Back on the road bike for a nice trip over airbase Soesterberg, cobblestones and a Strade Bianchi path at hill ridge of Utrecht.
Time for beer and film and pizza
Was interviewed by German radio about the Utrecht cycling policies and the bike parking at the train station.
What a privilege to go camping close to home with family. After some terrain maintenance work, the fire place is the warm and cozy place. Dawn in the morning shows it was a cold night, but not in the tent.