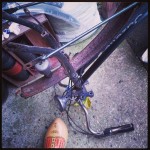 As you might have noticed last month I didn’t have any updates of this blog. Busy at work with internal affairs I can’t write about and preparing lectures abroad took a lot of time. And at home I was busy with maintaining the bicycles we own. Renewing the mudguards and the chain of a traditional Gazelle bicycle is time-consuming, but when finished it is a pleasure to see everything running smooth. I am happy that not all the bicycles in my bike shed need that much attention. Which brings me to the point that the Dutch have so many bicycles.

As Dutch bicycle ambassadors we always show the following graph to show that the Dutch own more bicycles per capita than other people in the world. To be honest, I haven’t a clue about the source or the reliability of the presented data. Any suggestion for better data is appreciated.

Bicycle ownership per capita per country in Europe.

Does this mean everybody owns a bicycle in the Netherlands? No, but we are pretty close at it. I excavated  some statistics at our national Office for Statistics and came to the following results: 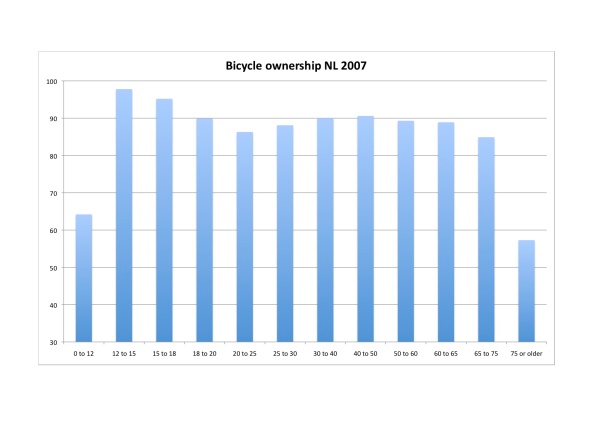 Ownership of bicycles in the Netherlands to age, 2007.

Two things cached my eyes. The first thing is that the age between 12 and 15 has the highest rate of bicycle ownership in the Netherlands. This group is depending of a bicycle to go to secondary school. At the age of 16 youngsters are allowed to a licensed ride of a moped, at the age of 17,5 driving a car comes in reach. So it is understandable the younger group has the highest ownership. Another interesting fact is the group between 20 and 30. They have the lowest ownership of the traditional working class cohort.

It is interesting to find out if this is only a dip in the 2007 numbers, of some more information can be found. With the data an easy overview can be made. 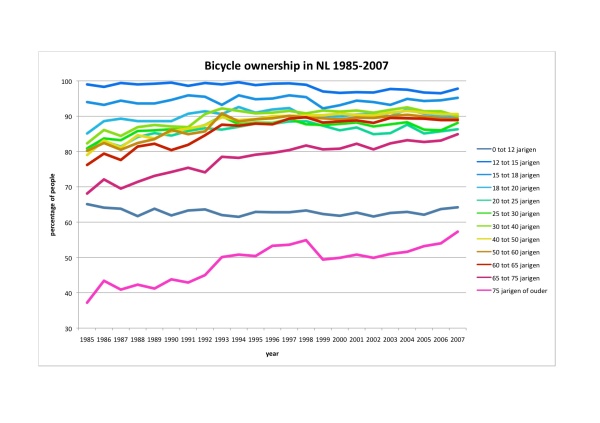 Development of ownership of bicycles in Netherlands to age. 1985-2007

This graph shows that over the years the group of 20-30 has almost the same ownership, but that the 30+group since the mid 80’s has grown, with the biggest relative growth in the 75+ group. But also the groups 60-65 and 65-75 show a remarkable growth during the years. Whatever the exact mechanism is behind this growth is not clear to me, it is likely about the policies to promote cycling to work and the tax benefits to buy a bicycle. I don’t have clear causal relationships, others might have a good explanation. The result counts to me, the growth shows that cycling in the Netherlands is more and more a matter of all ages. Something we have to be proud of. Note that in this data the newest trends of more cycling by young urban hipsters cannot be recognized, the series of data last until 2007.

But how about the 1,11? It means that some people might have more than one bicycle. With an easy sample I can prove this assumption. Last year I questioned my  Twitter followers how many bicycles and persons  belong to their households. The results show that my followers are not the average Dutch people. 52 Followers answered, they have average 2,33 bicycles  per captia, so more than double the Dutch average. The highest was a real collectioneur, with 2 persons and 14 bicycles ready to cycle. In that perspective the view in my bike shed is rather modest.

7 thoughts on “How many bicycles do the Dutch own?”

The city of Utrecht (pop. 361k) functions like a village when you cycle.
Spring holiday is the best time of the year to cycle into the green heart of Holland. Today from Driebergen to Hazerswoude, with a do-it-yourself ferry and a tea garden.
As cycling buddy for blind people I try to adapt to their interests. So not only quiet roads, but in this case also along the railway for some serious trainspotting by ear.
King's Day in Driebergen-Rijsenburg means I am organising a free bicycle valet parking for visitors of the free market. We had to skip two years because of Corona, but today over 700 people parked their bicycles. 🌞
Time for beer and film and pizza
Another beautiful day to cycle to the blossoms. Pears, apples and cherries are blooming now!
Yesterday's bike ride
Was in a superfluous car parking to see if it possible to turn it into a bicycle parking garage.